In ULI Cleveland’s spotlight interview, Paul Beegan, CEO and founder of Beegan Architectural Design, highlights his career path within real estate and his interests in the Cleveland scene. 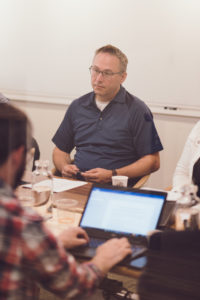 ULI Q1: How long have you been in ULI?

ULI Q2: What do you think are the major aspects that appeal to you or you get the most value?

Paul Beegan: ULI is an organization unlike any other in where there is a lot of open dialogue between a lot of professionals ranging from developers, bankers, attorneys, architectural engineers. It gives a lot of diversity and open dialogue compared to other groups which enables people to learn more about other aspects of the real estate industry. Also, there is little divide between people at the top of the organization and young leaders; everyone is able to strike-up a conversation with each other regardless of position, background, or company.

ULI Q4: Do you have a favorite or greatest project that you’ve done?

Paul Beegan: There are probably two answers: my favorite was the space for Allegro Realty Advisors. They moved from the suburbs to downtown and found an old historic building downtown and they were very open to letting me run with the design. The biggest project I’ve done is the Euclid Grand Project, which is really the last gap between East 9th and Euclid and Playhouse Square. It’s a transformative project that’s very complicated with historic tax credits, multiple buildings, multiple layers of finance, and it presented a challenge for both construction and design. I’ve been working on it for four years now that’s just how long complex projects like that take.

ULI Q6: You have a lot of community involvement, what do you do for stress relief?

Paul Beegan: I was a basketball coach at Lake Catholic but my daughter decided she wanted to pursue volleyball, so sadly I’m not coaching anymore (laughs). My main stress relief is music and guitar playing, and I keep a Gretsch electric guitar here in the office. My favorite music to play is late 80’s and 90’s alternative grunge. I’m a huge U2 fan and have seen them many times. I tend to plan trips around where U2 is playing so my wife is always happy when they go on tour because she knows they get a trip out of it.

ULI Q7: What are some of your favorite spots in Cleveland/Lakewood?

Paul Beegan: I am very sad that Sokolowski’s closed, that was a great spot. I’m close friends with Dante [Boccuzzi] and love his venues. I actually helped him build CODA because he is a musician too and he wanted a place to play.

ULI Q8: Is there anything else you’d like to add?

Paul Beegan: For anyone who wants to get the most out of ULI, I would say stay involved in committees and move around between different ones. You get a lot from the events but the committees really give you a chance to get involved and meet people. Even though we live in an increasingly digital world, anything related to real estate is still a personal business and when people get to know you, they will want to work with you. I’m involved with a number of organizations but ULI presents a lot of opportunities, and you can get information on what’s going at the inside level. I would also recommend that people consider the Regional Product Council because you get to learn about and experience what’s happening in other cities.

We thank Paul for devoting his time and shedding some light on his career, ULI experience, and interests in the Cleveland market.